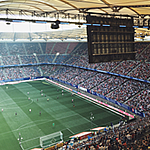 There have been a large number of cases recently where companies such as the FA Premier League, BT and Sky have been pursuing publicans for damages in respect of showing “live” football matches.  This area of law has become quite complex over the last few years.  There is a great deal of confusion for members of the public and for owners of public houses.  This article will aim to shed some light on the law surrounding the broadcast of football matches without permission from the Premier League or without having a Sky or BT subscription.

It is becoming increasingly common for members of the public to walk into any pub across Aberdeen to watch a football game either at 3pm on a Saturday afternoon, or one that was scheduled to be broadcast on BT Sport or Sky Sports, and instead find themselves watching a game with either a small time delay or from an overseas broadcast.  There are a number of companies operating throughout Scotland who provide publicans with equipment to be able to show overseas transmissions of football matches which would otherwise not be broadcast in the UK or only broadcast through Sky Sports or BT Sport.  These companies are not acting in an illegal manner as there is nothing to prevent anybody from showing a football match on TV.  Any pub can transmit a broadcast of a football match to the public without the requirement of a licence however what it cannot do, is show what is referred to as “the copyright works”.  The copyright works include, but are not limited to, any logos, music, and sound effects which are played that are protected by the company.  The companies, in these cases, would be the Premier League, Sky and BT.

As a result, many of the suppliers of the overseas transmissions operate a delaying system where the logos are blurred out either on BT or Sky or, if watching a 3pm kick off, a blurring of any of the Premier League logos.  If this is performed correctly, there is no breach of any copyright, as the copyright is not being broadcast to the public.  However, many publicans are being caught because they are showing games where logos are appearing, either on BT Sport or Sky Sports, because they are showing the wrong broadcasts.  What they are doing is showing a broadcast from Sky Sports or BT Sports instead of an overseas broadcast which they should be doing.  If they are caught with the Sky Sports logo or BT Sport logo on their screen they will likely be reported by an independent investigator and could face court action from either BT or Sky.  Many of these cases do not go to court; however these companies will insist on substantial damages being paid in order for the action to be dropped.  They will also require an undertaking to be signed giving up all of the equipment and to provide the identity of the supplier of the equipment.  The FA Premier League will also do something similar.  They will open a Court action against you for broadcasting the Premier League logo if you have displayed it on your screen without it being blurred over.

How do these companies catch so many pubs?  The FA Premier League employs officers to visit thousands of pubs across the UK every year. Inspectors from the organisation FACT visit pubs and report any broadcasts of Sky or BT to the supplier.   Once you have been caught, you will have very little choice but to pay the damages they request, or face a lengthy Court battle which will cost substantially more than simply paying the damages.  Publicans run a massive risk by broadcasting Premier League games, Sky Sports games and BT Sport games without proper licences.  As much as it is legal to broadcast any football match, it is illegal to broadcast any of the copyright works.  One slip could result in thousands of pounds of damages being paid to the FA, Sky or BT.

It should also be noted that any organisation, not just Sky, BT or the FA Premier League, may make a claim against you if their copyright works are being broadcast without permission or a licence.

We at James and George Collie can offer advice on this matter.  Please contact us for more information or assistance.